Blocktober 2020 – Blocking out Halo 2’s Mausoleum of the Arbiter

In this blog, I will be Designing, building and implementing a Level for the Halo prototype that I wrote about in the previous blog. While this post was published in mid-October 2020, this Level Design work was not only created for the purpose of this blog but also as my piece for Blocktober, a Level Design challenge where I need to design and build a game level from scratch to a finished level, over the course of October.

The objective of the Level Design here is to recreate and improve upon a segment of the level Gravemind from Halo 2, specifically the ending of the level where Master Chief is caught between warring Covenant in a special place known as the Mausoleum of the Arbiter. So this section would have to be broken down into two parts, Analysing the original level and defining the requirements and objectives using what was found out through the analysis.

Analysing the Mausoleum of the Arbiter

Note that all screenshots that appear here were taken in Halo 2 Anniversary (Master Chief Collection) using a mixture of classic and remastered graphics and will likely differ from the original Halo 2 for the original Xbox.

In the original level, the player would have to cross a bridge being used for a conflict between Brute and Elite forces. The player emerges behind the Brute forces while the Elite forces come out of the entrance of the Mausoleum of the Arbiter. As the player crosses the bridge, they have to fight the warring Covenant factions, effectively putting them as a pig in the middle of the war that both sides want dead, but the player can avoid being caught in the middle of the conflict by staying back and letting the Covenant factions fight each other and the player finishing off what’s left of the battlefield. 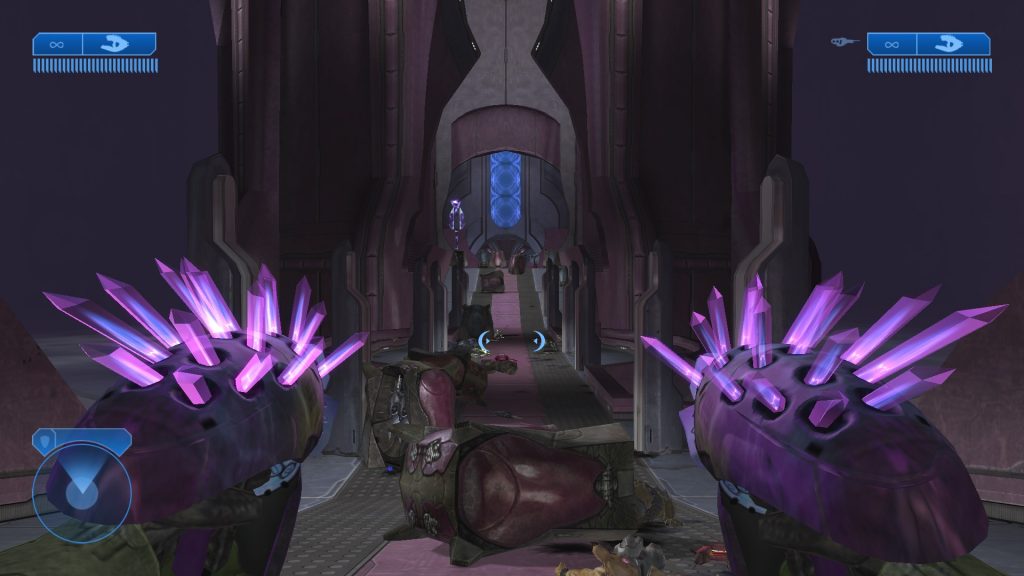 The Mausoleum of the Arbiter appears to make use of a circular layout which features a higher up perimeter circling around a larger lower floor, using a pod that once contained the armour worn by the Arbiter (one of Halo 2’s main protagonists) as the centerpiece of the mausoleum. A handful of small structures and columns that can be used as cover, both by the player and the artificial intelligence (shown in orange circles below) appear in outer parts of the upper and lower perimeters of the mausoleum. 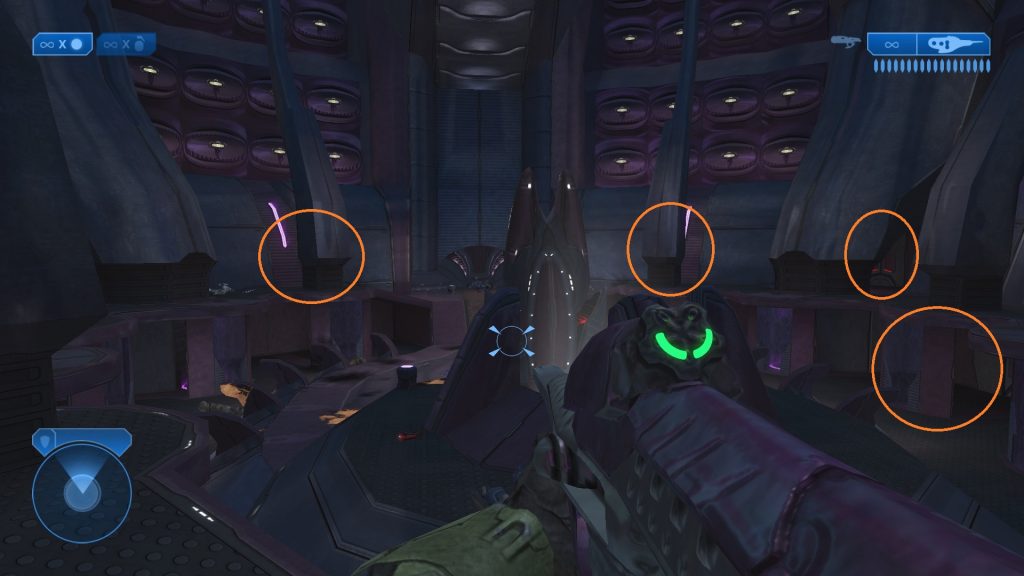 Behind some of the cover areas in this level, there are jump pads that allow whoever steps on them to move to the upper part of the mausoleum’s perimeter.

In Halo 2 Anniversary, the lighting of the Mausoleum of the Arbiter appears considerably bright in classic and remastered graphics, main difference between the two being additional lighting appearing in the remastered version appearing from not only the centerpiece but also small nooks on the walls that appear to be glowing. 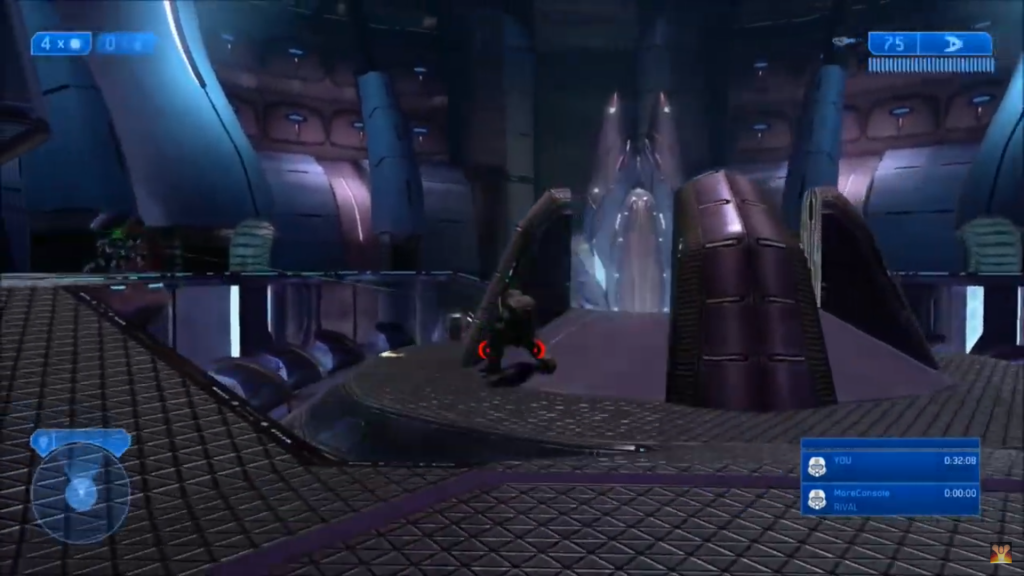 (Screenshot from YouTuber MoreConsole’s playthrough of Gravemind before the release of Halo: The Master Chief Collection in 2014)

The classic graphics however show a spotlight coming out of the centerpiece while the rest of the level appears to be lit up ambiently.

Following the analysis, here’s what I aim to achieve in my version of the Mausoleum of the Arbiter.

How the Level should play: 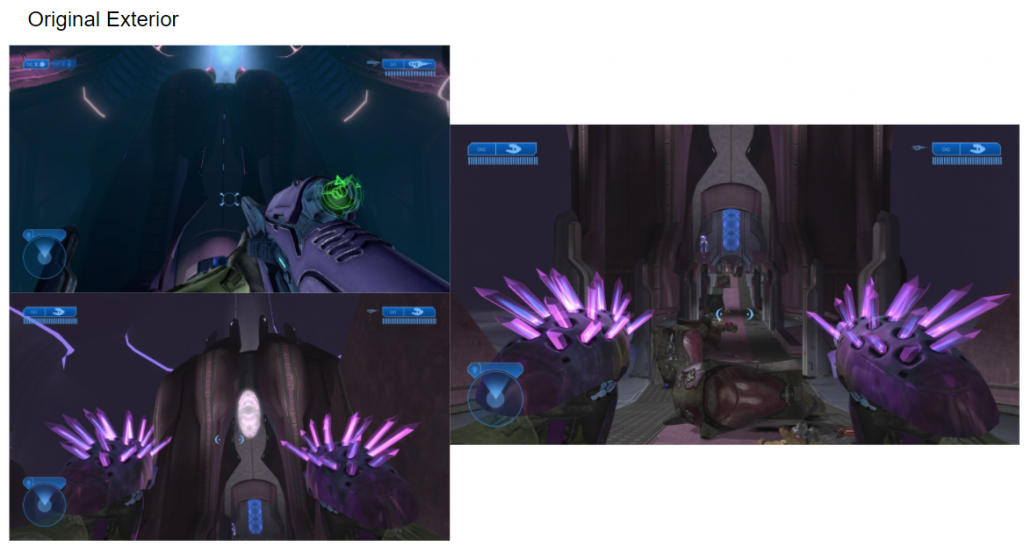 Before making any level plans and/or blockouts, I created a mood board using images of the original level which would be used to help with recreating the base level layout in the blockout as well as inspiring some changes that would later be made. 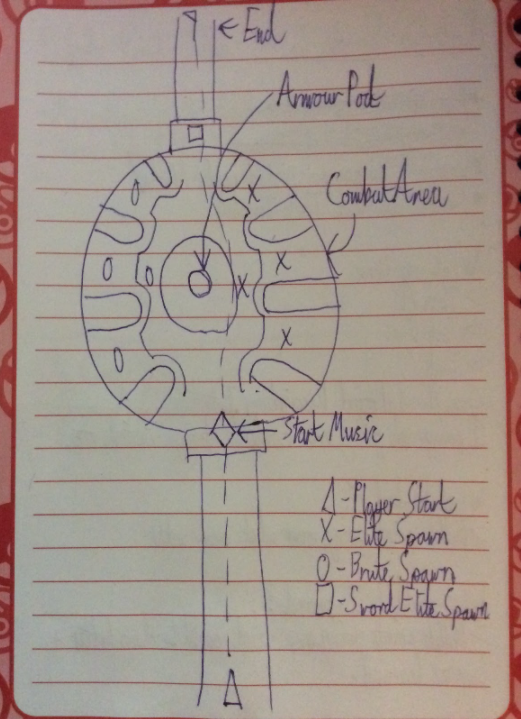 Prior to making a blockout, I created a rough idea of what I was trying to achieve, however, I felt as if working out the specific details, such as the scale of objects, structures and so on would have worked better in the blockout stage due to being able to make edits as and when they were needed in addition to referencing the mood board while creating different structures rather than making a rigid plan, however, this came at the cost of lacking the guidelines on aspects like the size of different structures and risking possible inaccuracies between the original level and my blockout in regards to the original layout prior to making my additional changes to improve the original level.

The blockout was started using three BSP Brushes in Unreal Engine 4’s level editor, a hollow cylinder that would later become the main part of the level and two cube brushes shaped to form the entrance and exit parts of the level, being the bridges.

I then began to make a rough idea of the interior, again, using BSP brushes, which was admittedly a very tedious process to get rotation values of what would become the pillars on the side of the level correct and extruding parts of a large hollow cylinder to create ramps.

After that, created more visual aspects such as the pillars and the centrepiece of the level, the pod that contained the Arbiter’s armour earlier in Halo 2’s campaign.

I then started to use the Blockout Tools plugin to add some platforms around the larger pillars.

Using a combination of the Blockout Tools plugin and subtractive BSP brushes, I then created the doorway where the player could enter or leave the Mausoleum of the Arbiter, keeping true to the original level where additional corridors were present for enemies to enter the doorway and into the Mausoleum.

I then created the basic layout for the bridge at the start of the level which would later be populated with physics objects to use as cover in addition to weapon pickups.

At this point, I began to shape the Mausoleum’s appearance, with the exterior being changed to start the foundations for a more rounded appearance.

The interior was a much more complex task, making use of multiple subtractive BSP brushes to create a more rounded ceiling as well as creating the initial lighting, using purple point lights for the neon-lit pillars, a smaller spotlight in the centrepiece and a larger spotlight for the main light. The image above shows the inital lighting setup after completing the ceiling for the Mausoleum’s interior.

To make the player aware of smaller rooms inside the larger pillars that are intended to have jump pads to get the player onto the upper part of the level, I made the decision to use a brighter-coloured light inside each of the smaller rooms, something that was not too well highlighted in the original level.

After working on the basic lighting of the interior, I began to work on the exterior lighting to start building the intended sombre envrionment for my version of the Mausoleum of the Arbiter. The challenge involved here was to replace the default lighting in Unreal Engine’s level editor to a much darker scene where the player’s visibility was not compromised. To resolve this, I made use of a spotlight above the bridges outside the level to provide ambient lighting as well as using some big point lights to tell the player that they are coming up towards a building.

I then moved on to making changes and additions to the level as a whole. To start with, I replaced the BSP cylinder that served as the upper floor of the Mausoleum with a blockout tube and ramps. I also made the decision to create a few additional pillars to add additional cover for the player and enemies, two of the pillars having a higher up platform to create some situations where the player could get up on even higher ground and getting into cover easily at the cost of the limited amount of ground surrounding the pillar, making a new addition to the original level. At this point, I also created futher visual additions such as the curved pillars on the ceiling.

Following this, I began to start placing objects with physics, mostly cubes serving as placeholders for Covenant weapon pods, as well as weapon pickups. These could be used by the player as cover or could be knocked over by the player shooting them to create higher ground.

Such cases of creating higher ground or even shortcuts can be seen in the image above where the player could knock down an object to use as a new ramp that could get them onto the upper floor of the Mausoleum’s interior.

What was learned from making the blockout?

I’ve realised that while using BSP brushes were helpful initially, it created a situation where the level design process was being rushed to mirror the original version of the Mausoleum of the Arbiter much more quickly. In future project, I’ll likely look into using the Blockout Tools plugin to create a much better quality blockout that could be iterated on easier, despite the risk of slower progress, to avoid the rushed approach I took to creating this blockout.

What comes next in this Level Design

At the time of writing, the level is planned to be populated with combat AI and some other work will be done to polish the level which are the next steps in this project. These will be covered in next month’s blog where I will be polishing the level and gameplay.